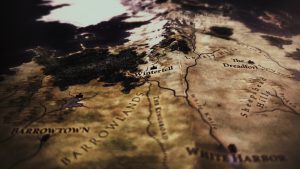 Have you ever wondered how the popular TV show Game of Thrones relates to the restaurant industry? The parallels may not be immediately apparent, but a fictional struggle for power among warring families isn’t too far off from the battle for market share and guest visits. In fact, what we know about the Game of Thrones characters can be applied to your pursuit of industry dominance. Warning: Spoilers for Seasons 1–7 lie ahead.

Jon Snow: Though being misleading could be advantageous in creating political coalitions, Jon is extremely loyal and honest. He has never learned a secret that he was able to keep for very long. This type of transparency is something that restaurant guests value as well, whether it’s knowing the nutritional content of a dish or the sourcing of its ingredients. Your customers also want your values to align with theirs. For younger generations like millennials and Gen Z, this can be a deciding factor when picking a restaurant.

Arya Stark: In the House of Black and White, Arya was asked to lose her identity and become “no one” in order to be inducted into the Faceless Men. When she realized she couldn’t, she started her journey home and regained her identity. Knowing who you are and what you do well is likewise important in the restaurant industry. It may be tempting to follow the latest trend, but you don’t want to go against your brand. While many restaurants are using third-party delivery, some have prioritized controlling their brand and are instead keeping delivery in-house.

Cersei Lannister: Many know her as a ruthless ruler, but Cersei is willing to work with anyone she feels will benefit her. She partnered with the Boltons and the Freys to pull off the Red Wedding, and with Euron Greyjoy to strike at Daenerys’ forces. Restaurants similarly rely on partnerships for providing things like Wi-Fi marketing and online ordering. Having these integrations as part of your guest engagement program is critical to delivering high-impact results.

Bran Stark: How much easier would communication have been in the time of Game of Thrones if messages didn’t need to be delivered by ravens or in person? Imagine if the Three-Eyed Raven had sent all the raw data of Westeros to Bran, and he used machine learning to piece everything together. Bran could have sent a personalized email with a subject line like “Jon Snow, the names of your parents are inside!” Machine learning finds connections between data that you may not have previously known existed, and personalization helps ensure that your email messages are read.

Margaery Tyrell: While betrothed to Joffrey Baratheon, Margaery endeared herself to the commoners by visiting orphanages and donating leftover food to the poor. Restaurant guests appreciate similar philanthropic efforts. Knowing that a brand supports a worthy cause may make them inclined to do the same. If you give the members of your loyalty program the option of cashing in their rewards as charitable donations, it could engage their hearts as well as their wallets.

Rickon Stark: The youngest child in the Stark family, Rickon is not remembered for much other than the way he died from an arrow shot by Ramsay Bolton. Instead of running in a straight line, he should have known that zigzagging might have saved him from that fate. Restaurants should likewise avoid being predictable. If your standard promotions have grown stale, try doing something different like offering a subscription service or prepaid meal passes. They are great ways to get your guests energized and excited again.

Knowing how to succeed is half the battle. As your restaurant tries to topple the competition and claim the industry throne, you may want to consider infusing your marketing strategy with some of these lessons learned from Game of Thrones.

No comments on “Game of Knowns”