When the Covid-19 outbreak began forcing restaurants to close their doors to guests, Zukku Sushi faced a unique dilemma: each of its three locations is housed inside a food hall. 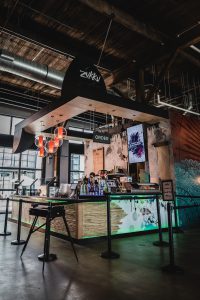 With its three restaurants occupying cafeteria-like public spaces, they were among the first eateries to shut down, leaving Zukku’s flagship location in Tampa inaccessible, even to staff. So the restaurant’s leadership got creative.

Ferdian Jap, a partner at Zukku, said he and his partners reached out to a friend in the business – a restaurant owner whose kitchen was underutilized due to the outbreak – and launched their own version of a ghost kitchen. Thanks to their online ordering platform powered by Paytronix, Jap and his partners have been able to keep operations running across all three locations.

“We’ve used Open Dining for a while now,” he said, “so we have a good list of customers that we can market to using the email system. Even though we’re in a completely different location, our customers are still ordering from us and we’re reaching out to them to come support us.”

Zukku used the email addresses collected from previous online orders and a pop-up on its website to direct guests to the new location for takeout and delivery. Jap acknowledged that it has been an adjustment for the chefs to work in a new kitchen alongside the other restaurant’s employees, but the Paytronix Order & Delivery platform has made it easy for them to remove the items that can’t be made without their usual equipment.

Jap also indicated that Zukku chose Paytronix as its online ordering solution partly because of the direct integration with the Focus POS system. “It’s very intuitive,” he said, noting that the company didn’t want to throw in another element of change for its employees. “Having the ticket print out like it’s a regular ticket on the line makes it as seamless as possible.”

Zukku’s Charlotte location has been able to continue operating out of its normal kitchen, where online ordering has been available for six months. The third location in Lakeland, which opened in January, launched online ordering ahead of schedule due to the coronavirus and Paytronix helped get it up and running in just two business days

“It was the fastest launch I’ve ever experienced,” Jap said.

The Zukku team then used the 800 email addresses it had gathered at the restaurant’s grand opening, along with social media, to tell guests that online ordering was newly available. Incentives were also offered for placing an order online, such as a free item of the week.

“The feedback system is really helpful because we know what we’re doing right or wrong, and we read every single one of [the comments],” Jap said. “We talk to [the customers] and see how we can make it right, and that has been really successful as well.”

Zukku is currently operating with 11 of its 40 employees, and Jap plans to bring another one back to the Charlotte location to keep up with the demand for delivery and takeout. The rest were paid for the past two weeks, and Jap said he intends to bring all employees back in time.

As for the other businesses in the food halls, Jap joked that they were “jealous.” He has been connecting them with Paytronix to set up online menus of their own.