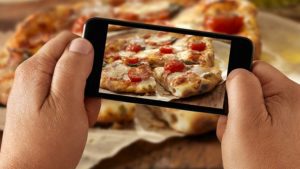 Whenever I Google “pizza delivery near me,” I’m overwhelmed by the number of options I have at my disposal. That’s why it’s important for any restaurant – but particularly those in highly competitive spaces – to think about what they’re offering customers that sets them apart from the competition.

When restaurant owners think about how their customers decide between them and their competitors, they often think that people’s decisions are made primarily based on food and customer experience. While that’s still true, there’s a crucial third element that consumers use to choose among their options — how restaurants use technology to facilitate guest engagement.

Let’s delve into that thought by examining two pizza chains that seem, on the surface, to be fairly similar: Domino’s and Pizza Hut. According to the people I know, the differences in food quality are negligible, as are the differences in traditional consumer experiences – the friendliness of staff, wait times, atmosphere, etc. However, the two diverged in one crucial area – the digital experience.

Earlier this decade, Domino’s made a commitment to innovative technology. The pizza brand opted to upgrade the consumer’s mobile experience, integrate its technology, and innovate its ordering process. Guests can now engage with the brand when — and how — they want to.

Recently, Pizza Hut has launched a more robust digital loyalty program of its own. This spend-based points program touts the ability to earn “unlimited points” and allows program members to redeem points for medium or large pizzas. It’s very likely that this program is at least partly an answer to Domino’s, but whether it will have the same degree of impact is yet to be seen.

Simply focusing on technology isn’t enough guidance to help a restaurant reinvigorate its sales and bring back lapsed customers. Instead, a brand needs to marry its technology upgrades with the specific needs and wants of its consumers. We’ve put together a free, on-demand webinar to go over exactly which strategic changes Domino’s made that helped them meet their consumers’ needs and propel them to one of the leaders in the fast casual restaurant space.

The webinar, entitled “Domino’s Versus Pizza Hut: A Tale of Two Tech Strategies,” explores which technology upgrades Domino’s made that had the most impact on its business. We discuss key elements of a mobile strategy and why mobile alone isn’t enough. Finally, we go over the key metrics for building an effective technology strategy of your own.